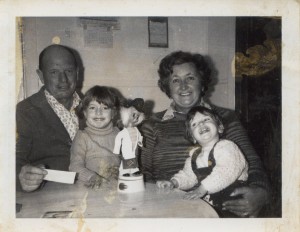 Cassmob over at Family history across the seas has issued a geneameme challenge to encourage Aussie bloggers to celebrate Australia Day 2014. Normally, I’m not one for these types of things, but this one tickled my fancy. So here goes:

My first ancestor to arrive in Australia was:

Thomas WOOTTON – arrived 12 Jul 1824 on the Countess of Harcourt.

I have Australian Royalty (tell us who, how many and which Fleet they arrived with):
Yes!! It took me a while, but I FINALLY found a couple (literally):

I’m an Aussie mongrel, my ancestors came to Oz from:

Did any of your ancestors arrive under their own financial steam?

Most of mine came out as free settlers, who paid their own way. Some came out semi-assisted as part of organised emigration schemes.

How many ancestors came as singles?

All my early ancestors came out as singles.

How many came as couples?

The earliest couple were Hezekiah GREGORY and Susannah Philip(a) INCH who arrived 28 Aug 1841 on the Globe. And then Septimus DAVIS and Lucy CHURCH who came with their adult children from Chew Magna, Somerset to Australia in about 1851.

How many came as family groups?

The earliest couple were Hezekiah GREGORY and Susannah Philip(a) INCH and their young children who arrived 28 Aug 1841 on the Globe. And then Septimus DAVIS and Lucy CHURCH who came with their adult children from Chew Magna, Somerset to Australia in about 1851.

Did one person lead the way and others follow?

Only the above example DAVIS family. Some of the adult children came out first, and parents and siblings followed.

What’s the longest journey they took to get here?

Did anyone make a two-step emigration via another place?

Yes, Henry James HARPER was on the William Bryan which was the first ship to bring people to establish New Plymouth in New Zealand in 1841. He then came to Australia in 1845.

Which state(s)/colony did your ancestors arrive?

Did they settle and remain in one state/colony?

Did they stay in one town or move around?

Over time most spread out.

Do you have any First Australians in your tree?

Not that I am aware of.

Yes, most were farmers, tradesman and small business owners.

What occupations or industries did your earliest ancestors work in?

Does anyone in the family still follow that occupation?

Did any of your ancestors leave Australia and go “home”?

NOW IT’S ALL ABOUT YOU

What’s your State of Origin?

Do you still live there?

Where was your favourite Aussie holiday place as a child?

North Sunshine, Vic with my grandparents.

Any great Aussie adventure you’ve had?

Won a week long trip to the Northern Territory and it was AWESOME!!!

How do you celebrate Australia Day?